Today I will be sharing the story behind how developers built the living world of Bless Online. Developers wanted to make Bless Online an authentic and unique fantasy world, rather than take an existing legend or myth and simply apply it to Bless. They aimed to make something new but still stay true to the essence of fantasy worlds.

This philosophy guided their choices in deciding how to create the races, cities and other aspects of Bless. For example, when creating the dragons, they did a lot of research about the appearance of dragons in myths and legends before deciding that a “classic” dragon type was the most suitable for the Bless fantasy world. 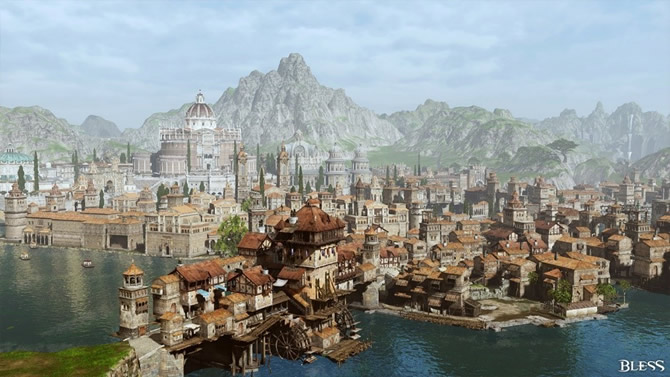 In short, developers wanted their audience to see a Bless dragon and say “Yes, that’s exactly what a dragon is,” not “It looks like a dragon.” They wanted to capture the essence of what a dragon is in their designs.

While creating the world of Bless Online, the most important element was probability. By probability, developers mean “is this likely to actually happen this way? Is this the best way for it to be set up?”

For an example, let us look at the character type “Lizard Person.” it would be very disappointing if a character type as interesting as a “Lizard Person” didn’t appear in Bless. Developers want this kind of character. However, there is no definite idea of what a lizard person actually looks like.

Since developers have no real-life reference, they have to think about what a lizard person might look like. What if lizard people evolved into a human-like form? What would it look like? What things might change physically as a lizard evolves towards being bipedal? By approaching the lizard people’s design with thought-provoking questions like these, developers were able to add interesting creative elements to Bless.

“If lizards evolved, would they look like this?” “Would lizard people be living in this kind of environment?”

Rather than reducing the lizard people to “just another monster,” Bless shows the lizard people as an intelligent race with the ability to walk on two feet and use weapons. Developers designed for them a whole society and culture, in addition to a completely new environment which they will live in.