Q: What do the symbols on the World Gate denote? 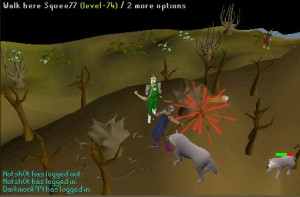 Mod Rowley: The World Gate symbols are letters from the established Guthixian alphabet. My initial aim was for those letters to match the worlds they go to, but that was never something we could sustain (as there are many worlds that start with the same letter), so we got as close as we can. As future content is released, the player will start to ‘recognise’ more of the worlds listed (though you can find more cheap runescape gold).

was originally going to be Hallowed Isles – a non-canon placeholder name for the icyene homeworld. It’s possible we’d give it a better name if we ever go there, though it’s currently also known as New Domina.

was originally going to be Lacertium – a non-canon placeholder name for the dragon rider homeworld (‘lacerta’ being Latin for ‘lizard’, and -ium to match Pandemonium and Vampyrium – Zaros’s names for those places). Mod Raven eventually went with Iaia for this plane (which better fits the culture of the dragon riders), but pointed out that if the World Gate could go there, it negates the narrative of One of a Kind, so late in development we pointed it to Teragard instead. Zaros reached the dragon rider homeworld by other means than the World Gate (I suspect that it’s slightly off the beaten track/hidden in some way, which is why he missed it the first time around).

stands for Muspell (a term from Norse mythology) and it was originally my intent that this was the homeworld of the auspah (Char’s race), but it’s open to interpretation, so could be “Zamorak’s world”, as referenced in elf lore (though I personally think that’s just Freneskae) or the place where Moia went with Zamorak (though I personally think that was just Infernus). Of course, these could all just be different references to the same place – the truth will possibly be defined in future content.

stands for Tarddiad, which is Welsh for ‘origin’, and the homeworld of the elves. The description of this plane doesn’t mention crystal, but that could just be because the gate only offers a limited view of the worlds you see through it.

Q: Why are the Nihil still alive even after completing the quest? 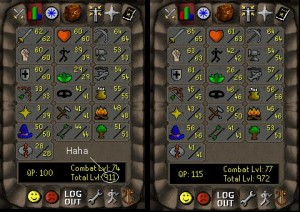 Mod Rowley: Zaros created more than a few of them in his quest for knowledge, and since being abandoned they have probably learned how to propagate (“Life always finds a way” – Dr Ian Malcolm). I can envisage nihil have learned to hunt muspah for their energy, in order to create more of themselves.

Q: Why did we only get a head override as the post-quest reward and not the full set?

Mod Rowley: To spend the time creating a full set would have taken graphical time away from other areas of the quest. We typically go for head items (when doing only one item) as they can be shown off on the forums. It may be that future updates add to this set.

Q: Why are the Muspah drops extremely low quality compared to the requirements of the quest?

Mod Rowley: The muspah area is instanced, and so there is no competition for kills, and you can also equip the Shard of Zaros to also make them non-aggressive. These things can make the area quite AFKable above a certain level, so we didn’t want the muspah to be too lucrative (though you can earn ~3 mil/hour here). That said, we do have plans to add some rs gold unique item drops to muspah in a future update (already in development) that should make them more worthwhile.

Q: Have we seen the whole of Freneskae or is there still more to see? 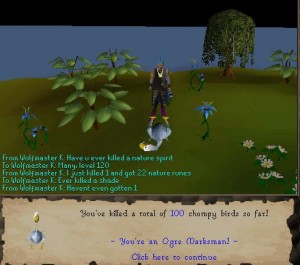 Mod Rowley: There’s definitely more to see, if for no other reason than to explore what became of the Chelon-Mah and the Mahserrat tribes. When we might see that, though, is anyone’s guess.

Q: Who or what is Debris?

Mod Rowley: When Zaros says debris, he’s just describing the state of the fragmented spheres – it’s not a person or place. The point is that the spheres used to be something important, but are now just inert and expelled of energy/contents.

Q: Does the Measure do anything after the quest related to Divination?

Mod Rowley: It measures levels of anima wherever you plant it, and there are some hidden things you can find with it… I won’t say where in case you’d rather find things for yourself, but all hidden things have now been found, so the information is out there (and we’ll be updating our wiki with that information at some point).

Q: What happened to the Zarosian-themed combat ability that was polled a few months before the release of Fate of the Gods?

Mod Rowley: The poll for the combat abilities was never attached to this project – it’s a separate update with an ETA of May. It’s currently in development.

Q: Were the Elder Gods born in Freneskae?

Mod Rowley: The elder gods that created this universe were born on Freneskae, yes.

Q: Zaros says that Mah created him and Seren as toys but, don’t you think they were more like parents to Mah?

Mod Rowley: I tried to show parallels between real-life parent/child relationships. Zaros is akin to the runaway teenager who later finds respect for his parent (and moves back home after his own failures), whereas Seren stayed to nurse her mother as she succumbed to illness and old age (effectively becoming the mother herself).

Q: Zaros says that he didn’t start any of the wars that he was involved in. Does that mean that Icthlarin started it when Zaros fought in the desert?

Mod Rowley: I’d imagine it being more prosaic than that, with it starting from simple border skirmishes (Kharidians launching a pre-emptive strike at the expanding Zarosian border out of fear) involving none of the gods. The desert gods have ever only been interested in their own little area of the world, with no desire for expansion.