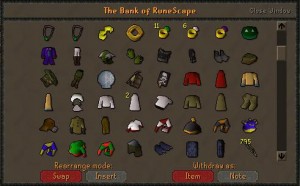 Crafting in the massively multiplayer online role-playing game “RuneScape” is a good way to make a lot of fast, easy money in the game. Free players can make a considerable amount of money from crafting, but paid “RuneScape” members can make even more. In order to make the most RS Gold possible, you’ll need to increase your skill levels not only in crafting but also in mining, smithing and combat. Once you’ve increased these skill levels in “RuneScape,” you’ll be able to get all of your crafting materials for free.

Make glass if you’re a “RuneScape” member. Go to the bank in Lumbridge and remove all your armor and weapons. Purchase some buckets at the general store. Return to Port Sarim and talk to the monks at the dock. Tell them you want to go to Entrana. Fill up your buckets with sand and get some seaweed from the shore in northern Entrana. Follow the glass making tutor’s instructions on how to get started making glass. However, don’t craft the glass into items; it’s worth far more money in its molten state. Sell the glass on the Grand Exchange.

Increase your combat skill so you can kill the level 35 bush snakes in Tai Bwo Bwana Village in Karamja. Increase your crafting level to 45. Get at least 30 gold pieces from the bank, and buy or find a knife to take with you. Walk west from Lumbridge to Port Sarim and talk with one of the seamen on the pier going north and south. When he asks you if you want to go to Karamja, say “Yes.” After you kill the bush snakes, use the knife on them to get the snake skins. Take the hides to the tanner in Al Kharid, then use a needle and thread to make snakeskin clothing items and armor.