Skip to content
by Posted onDecember 10, 2012December 15, 2012
Despite the Thief’s best efforts, his traps and poisoned bolts, his amulets aglow with enchantments, his opponent struck him to the ground. In the waters of the swamp, he struggled to survive as the undead horror lumbered closer. He threw knives as he quaked, desperate to dispatch it. But at long last he succumbed to his wounds. His body crumpled beneath the murky water. Fated to remain entombed in the sick scent……until a fellow adventurer arrived. With deft sword work the armored Warrior finished the monster with a few easy strokes. With splashing and sputtering the creature slumped into the mud, defeated. Before departing, the Warrior came to the side of the Thief and began to work, reviving the Thief’s broken body. With his work complete, the Warrior vanished into the mist without a word, leaving the Thief well enough to escape the swamp and fight again.This is common in the world of Guild Wars 2.While many MMO’s rely on a healing class to support the player population, Guild Wars 2 strives for new group dynamics by giving every player the ability to both heal and revive their fellow adventurers with very little effort. And while each successful resurrection rewards the healer with a handful of experience points, the amount is too small to matter much. Why, then, do other players consistently go out of their way to resurrect fallen strangers?During my most recent bout of weekend play, I began to ask the strangers that resurrected me why they were compelled to save a stranger. No easy task, mind you, as sparking philosophical discussions in the midst of battle can cause its own set of problems. And while most of my healers ran off without responding, no doubt preoccupied with their own quests, I did receive some illuminating answers.

One player noted: “I hate it when I die in battle” — a touching answer revealing his wish to save others from his own frustration. Similarly, another traveler — an Elementalist partial to fire — said “I just like being nice.” 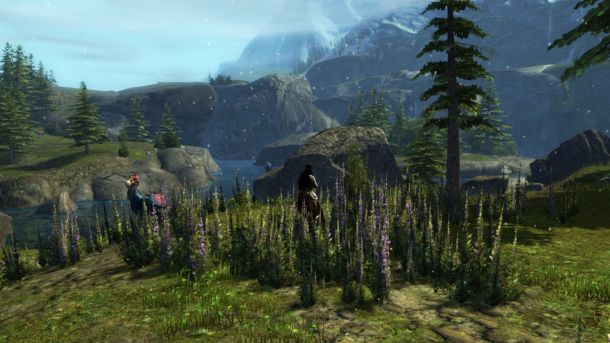 These responses represent a bead of water in the veritable ocean of players, but they still tell us that the benevolent and compassionate do exist in the Guild Wars 2 community. We are a social, cooperative bunch. Without a sense of togetherness and community, an MMO just wouldn’t be the same.The benevolent and compassionate do exist in the Guild Wars 2 community.The play in Guild Wars 2, of course, was designed with player cooperation in mind. The developers at ArenaNet set out to create a more collaborative world, separating the competitive elements into isolated systems that require an opt-in. Gone are the days of ambushes during your stroll through the countryside.

Instead, players always share experience without any fear of kill-stealing. Furthermore, dynamic events encourage — and often require — multiple players working together to complete. Even the charming jumping puzzles and hidden nooks that dot Tyria can be better found when tailing an experienced adventurer.But no matter how much ArenaNet pokes and prods, nudging players towards merry fellowship, no one is forcing players to resurrect a stranger off the well-trodden path. No high council watches from the mountaintops and dispenses judgment on those that ignore the needy. If you run right by a fallen player without helping, the Guild Wars 2 community will not care. It’s just a game.